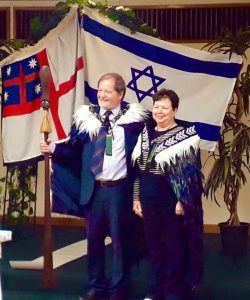 This article was first published on Times of Israel

During the recent Covid 19 lockdown, a small hui (meeting) was held in Northland between members of the Ngāpuhi iwi (tribe) and outgoing Israeli Ambassador, HE Dr Itzhak Gerberg and his wife Shifra. This was the culmination of a number of engagements with Ngāpuhi, in the time that Ambassador Gerberg has been in New Zealand.

The beginning of Gerberg’s appointment in New Zealand was marred by New Zealand’s role in co-sponsoring UNSC Resolution 2334. He was recalled to Israel in a diplomatic spat that lasted several months.

Upon the ambassador’s return, Ngāpuhi kaumatua (elder), Pat Ruka felt compelled to organise a special powhiri (welcome ceremony) for him. Joined by many Māori from around the nation, a moving ceremony of apology, called a whakapāha was held at Hoani Waititi Marae (meeting house) in West Auckland. Its purpose was to express regret for New Zealand’s actions in standing against Israel at the UN and to seek forgiveness.

For Ruka, the event held deep significance and was the outworking of stories handed down to him by his tupuna (ancestors). His forebears, because of their Christian beliefs, maintained a deep respect and affection for the people of Israel. Ruka tells of his people travelling to New Zealand’s capital, Wellington, to offer the government iwi (tribal) land for Jewish refugees following World War II. His tupuna were told to “go back to their hovels”.

During the time of Gerberg’s posting in New Zealand, the relationship between Ngapuhi and the ambassador has continued with further engagements in the North. The most recent hui was held with the descendants of those who in 1947 had sought to shelter Jewish refugees.

Today, both parties are keen to see the strengthening of the relationship between Ngāpuhi and Israel.

Ngāpuhi and Israel are going to enter into a relationship that is going to be beneficial to both of our nations, technology (sic), economically and agriculturally and in other ways which is between Israel and Ngapuhi.

It is important to strengthen the connections between Ngāpuhi and the State of Israel in order to increase the economic and social vigour of the community and to help directing the human resources and the ability to create innovations that ensure opportunities.

Pat Ruka and Ngāpuhi will no doubt be looking forward to continuity of relationship through the new ambassador, who will assume his position in New Zealand in the coming months.

In expressing the hope of his people, Pat Ruka referenced a Māori proverb coined in 1947:

From the cradle of the earth (Jerusalem)

to the very ends of the earth (Aotearoa)