Kiwis stand in solidarity with Israel

Hundreds gathered across the country to stand in support of Israel on Sunday, 23 May 2021. Israel Solidarity Rallies were staged in Auckland, Wellington and Hastings. There was also a gathering on 22 May in Kaitaia. 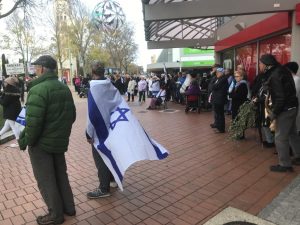 In the small Hawkes Bay town of Hastings a disproportionately large group of 250+ turned up. The rally was organised by Pastor Nigel Woodley, renowned for his courage in standing up for Israel. A few days earlier he received media attention for his attendance at a pro-Palestinian rally on the steps of Parlament. The warm, receptive crowd heard from Pastor Woodley and Ashley Church, director of the Israel Institute of New Zealand, how a small nation just twice the size of Hawkes Bay had a right to defend itself from the 4,300+ rockets that were fired over an 11 day period. 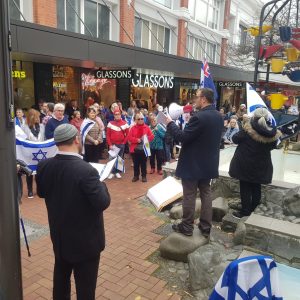 Although the Wellington rally had a smaller turnout, with about one hundred people gathering at Wellington’s Cuba Street Bucket Fountain, Joanna Moss of Friends of Israel said there was a village-like feel to the rally: “What stood out in Wellington was the atmosphere of love – love between the Jews and Christians and compassion for people surrounded by hate in Gaza first and also in Israel. Several had Free Gazans from Hamas banners”.

A bleak and cold day did not dampen spirits as around 500 people from as far as Hamilton, Whangarei and Tauranga gathered in Auckland’s Aotea square to enjoy speeches, songs and dance.  Ngapuhi kaumatua Pat Ruka, a staunch friend of Israel, opened with a mihi/welcome. A diverse range of communities was represented: Māori, Pasifika, Kurds, Indian, Christian, Jewish and, notably, a group of Iranian refugees showed enthusiastic support.

An unedited video of the Auckland rally:

View the full gallery of Auckland rally images on Facebook.